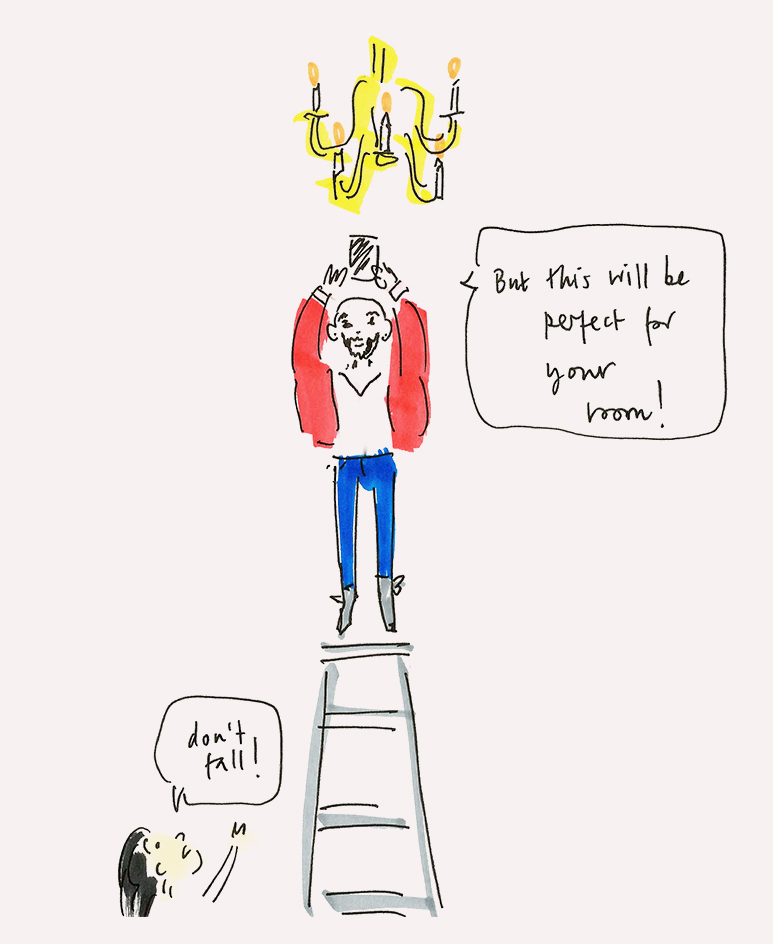 Mr. Clark, you are actually a classically trained musician. How did you get into interior design?

Harry Clark: That’s true. My musical talents were recognised and developed from an early age. After my A levels, however, I faced the choice of either continuing my musical training to become a concert pianist or rather devoting myself to drawing and design. I decided to study interior architecture and stage design. It was during that time while I was working as an intern and still in my twenties, that I got the chance to see the first performances by the mezzosoprano and great Wagner interpreter Waltraud Meier at the State Opera in Hanover. That was absolutely awesome and made a tremendous impression on me.

When did it become apparent to you that you preferred design to music?

It took a long time. I have always maintained the two interests in parallel. When I was a child, my two favourite activities were playing the piano and drawing, and of course arranging the living space of my parents and friends: whether they wanted it or not (laughs)! I still play my grand piano, albeit not professionally anymore.

So was the decision to opt for design an easy one?

As I say the route to interior design was a long one and went via music, stage design and garden architecture. But at some point I realised that any artistic activity is fundamentally about the same thing which is the desire to create; and that led me to interior design.

Who are your clients and how would you describe them?

They are usually people who possess a considerable aesthetic understanding but don’t feel certain sure about how to implement it. Or they lack the time to do so; that’s also quite common. The spectrum of my clients includes entrepreneurs, lawyers, doctors, diplomats and artists, even people who are designers themselves, like Stefano Pilati, for whom I created a penthouse in Berlin when he moved from Yves Saint Laurent to Ermenegildo Zegna.

Can you still remember your first commission?

I certainly can. It was a garden which I designed for a journalist in Clapham in South London. At the time, I indulged in the rather obscure activity of “skip diving”, that’s looking for interesting items in open containers left by builders outside places where they are working. One day, a man approached me and asked what I was doing looking around in his container. He was the journalist for whom I designed the garden and it was for the same client I later also developed a colour concept for his house.

What basically appeals to you about interior design?

For me, interior design is far more than just possessing nice things and putting them in the right places. I see a much deeper psychological and sensual aspect in it all. Interior design turns an environment into a space in which you will feel comfortable and protected; a space you shape with your own character, where you can harmonise your needs with those of others. This touches on a number of absolutely essential questions. I see interior design as a living environment which can be coherent and harmonious but can sometimes be allowed to be disharmonious, too: just like real life itself, really. 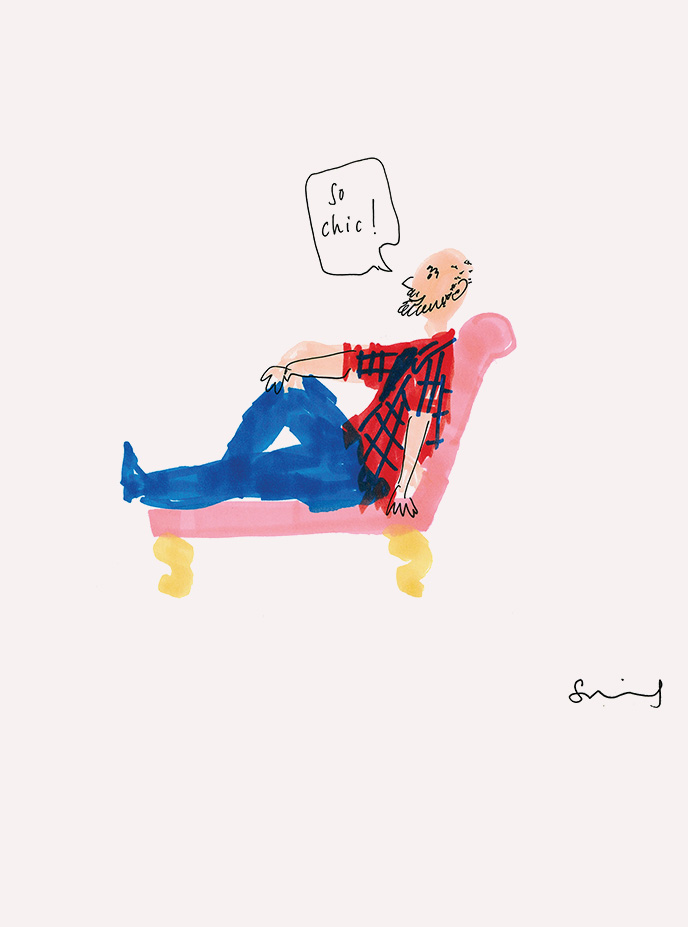 What approach do you adopt when you start a new project?

To start with, my client and I carry out an inventory. Is the design wish a completely new beginning which involves ripping out everything that’s there and starting again? Or might it be the transformation of an existing room or an apartment or a house with the intention of bringing new interest and excitement to an existing scheme?

And what happens next?

When visiting the project space for the first time, I conceive a plan of the environment. That means I look through the window and analyse what I see. Maybe this derives from my time as a stage designer. I pay attention to all the visual axes and find out where the main existing focal points are. I then visualise the overall composition which arises from what I see and which could exert an influence on the later interior.

Naturally the cardinal points and the incidence of light play a great part, whether you want to create contrast or harmony within the environment.

If you look out and see a grey concrete wall with a salmon pink coloured roof, why don’t you consider painting the room in question pink, too? Only joking! It‘s always a question what sort of balance you want to achieve. In this case I certainly wouldn’t use a contrary colour to salmon pink; that would backfire terribly. Finding a nuance that harmonises the outside view with the interior is my advice. I always try to get as much information as possible from my clients. They will determine their own environment. What I design for them is merely the result of their requirements.

And if the clients have only vague ideas of what they want?

The state of a building can be quickly identified, whether it is in poor condition or not. Sometimes the client says this and that we must definitely get rid of. I reply I think we should rather concentrate on an entirely different matter. Any space – an apartment or a house can be structured like a landscape plan, like a map to be scrutinised. Sometimes it has to be dismantled piece by piece, only to be put back together again eventually.

To come back to classical music. Do you see similarities between creating a composition and designing an apartment?

Yes, many. For me, music is the mirror image of architecture and design. Take a three-part Bach fugue, for example. There are plenty of parallels to be discovered in terms of spatiality, perspective and rhythm. 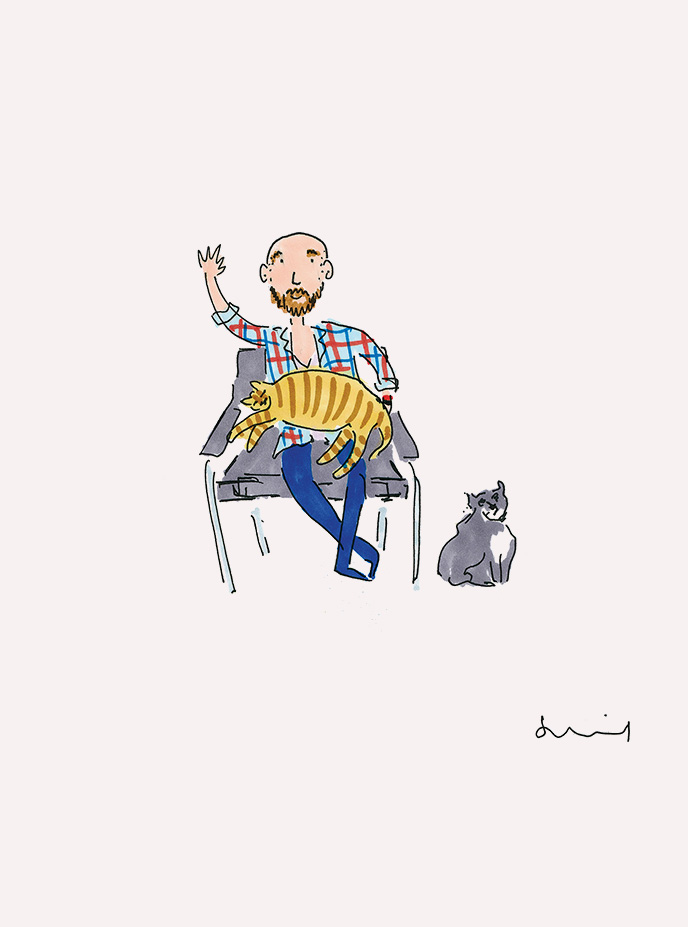 How important are colours in interior design?

For me colours are the nuts and bolts of interior design. Their interaction is like the collaboration between singers in an opera production. That is why one speaks of vocal colouring in singing voices. The same can easily be said about colours. They have a sound too. Even grey exists in a vast number of shades. But these days we are sometimes slow to recognize the significance of these various hues. Colour can do such much. It can guide and protect us: it means that I can create living zones without any need for walls just by using colours.

Do you sometimes experience surprises, such as colour shades that do not match the popular taste but which in a special combination at once are just right?

What is a popular taste? We live in a world of many influences; there is actually no longer such thing as popular taste. It is the factors dominating the environment, that are most relevant. The colour of earth and stone for example: a cooler timbre tends to prevail in northern Europe. Ochre, which is extracted from limestone in the south, is much warmer than ochre made of clay in the north.
We happily fall back on the assumption that everything is interchangeable, that every wish can be fulfilled in the same way all over the world. But that is not true.

According to which criteria do you combine colour shades?

This is the same as in music. If you only create harmony, things become boring very quickly. To achieve an overall harmonic atmosphere, creating contrasts is vital. The direction of light and its intensity are also crucial. Every aspect can be influenced with the right use of colour.

What rules need to be heeded in this regard?

My advice is to use more than one or two colours in a space. Three or more shades create a much better spatial structure. Only the boundary from one colour to the other completes the desired hue. Colours are completely dependent on each other in their reciprocal effect.

Are there any particular colours you appreciate more than others and therefore use regularly?

My choice of colour is not set in stone but I generally opt for stronger shades which initially may even appear a little challenging at first glance. These colours are commonly found in nature rather than being chemically manufactured. I love tree lichens. At a closer look, you will see just how vivid and intense their colours are. But I rarely use the same colour scheme twice in two different projects. 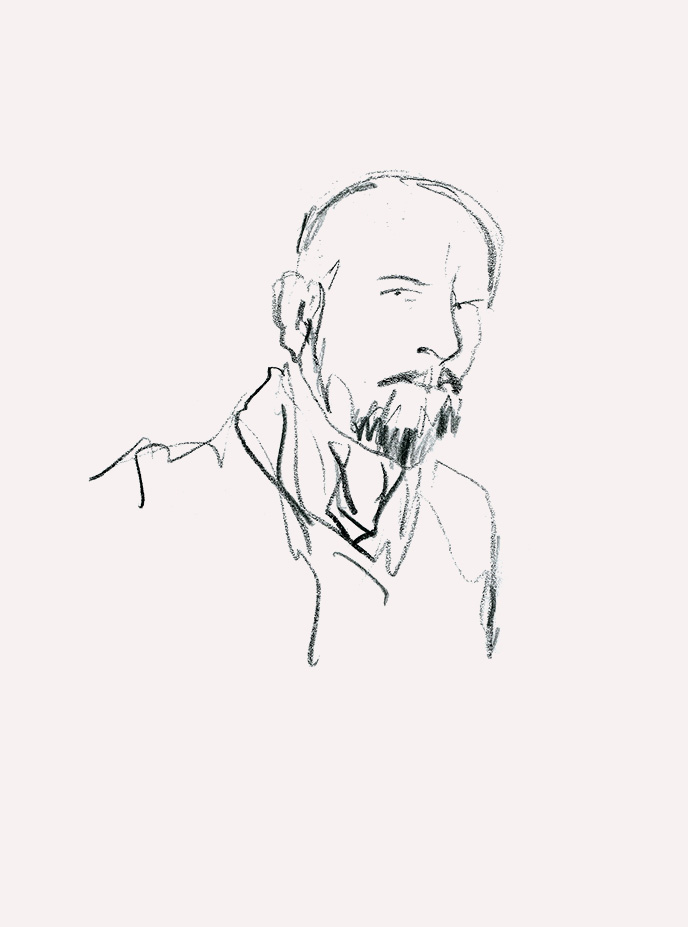 Your apartment here in Berlin’s Tiergarten district also features plenty of designs from the 1970’s. What is it you find particularly fascinating about this era?

I’m a child of this time, I like the playful features and the pop culture of seventies design. There was a passion then for shape and colour in a way which still retained something of the space age aesthetics. I can also detect a renewal of Art Deco, a style which barely existed in Germany, unlike in France, England and America, and then only in a reminiscent way.

Do you have any role models or favourite designers?

I like the opulent and buoyant design of the Italian and French designers in the 40’s, 50’s and 60’s: Jacques Adnet above everyone else. His creative way of using leather in furniture design was completely new at the time. Another clever mind I very much respect is the lamp designer Gaetano Sciolari. A few years ago, his designs would have been described as casino trash. I also like Romeo Rega. And Willy Rizzo, the famous photographer of Chanel and portraitist of Marilyn Monroe. He simply couldn’t find any furniture he liked. So he started to design his own which in later years became iconic.

Do you also design furniture?

Oh yes, with a passion. With my master joiner and metal worker we designed a kitchen for Stefano Pilati which intended to reflect the technical age of Berlin in the 1920’s. We used a great deal of etched metal with subtle shades of gold and burnished surfaces.
A great source of inspiration for this project was Pierre Chareau’s “Maison de Verre” in Paris.
I also design stylish minimalist built in furniture which creates a lot of storage space. At the same time I like to combine materials which at first glance do not seem to go well together.

For example metal, natural stone and glass. I also use a lot of brass; wood also, but I keep that mostly on the floor. Sometimes I employ concrete or Corian. Have you seen the red sinks in the guest bathroom? Aren’t they splendid?!

Would you say that you have a certain style?

Interesting question. Naturally, I am guided by the wishes of my clients. But I certainly have a personal trademark. It was already visible in my garden design as people would recognise my style immediately. Maybe that’s because of the way I deal with space, distribute proportions or hang pictures. Or how I spice up interior design with humour and irony despite the urge to create timeless elegance.
I’d call my style “eclectic truffle pig”!

Final question, how come you are in command of such good German?

I was born in Germany. My mother was German but grew up in New York. My father was English. I have an international self, but when it comes down to it, my heart beats for England, too. I lived in London for such a long time.